I am listing to my "purchased" playlist on itunes, in the order in which I purchased the music. It is 3283 items, spanning 11.5 days. It will take me more than that to listen to it, since I can't listen 24 hours a day. It starts out with Coleman Hawkins "Body and Soul," then skips to Feldman's "Rothko Chapel." Unfortunately it cannot ever get better than that, but it has more Morton Feldman after that, then Mozart's quartets dedicated to Haydn, some Sonny Rollins and Stan Getz and Lee Konitz. Keith Jarrett. Sinatra's wee small hours. A Tsaik symphony. Joe Pass's "Virtuoso." I'm not sure when this was, since I don't know how to figure out the exact chronology. I do know I was listening to Joe Pass while writing 1st Lorca book, which is about 2006.

Coming up is some Bach and Shakespeare.

My brother-in-law Norbie Kumagai gave me an airport express he wasn't using, so I can stream the music from my laptop to my stereo speakers. I have other music that's not purchased (downloaded from cds in instead). That would be my other 5000 songs that I'm not worried about right now.

You could do something similar if you kept track of all the books you've bought or checked out of the library.
Posted by Jonathan at 6:38 PM No comments:

My assignment for thanksgiving was appetizer. I made a dip with


I carmelized the onion, then sautéed the green veggies and the artichokes. It all went in the blender, then baked in the oven for 20 minutes, with some extra cheese on the top. It was a big hit. 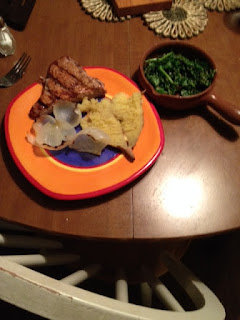 I took an onion and cut off the ends and stuck it on the grill without doing anything else to it. I put on a white sweet potato at the same time, and they took the same time to cook. When they were almost done, I put on a piece of ahi which had been marinated in tamarin and balsamic, finished with a little black & cayenne pepper. I served it (to myself) with kale sautéed with ginger and sesame seeds, with a little tamari and sesame oil to finish.

The peel came off the onion with no effort at all, so I had a cooked and easily sliceable onion as a garnish. Everything in the meal was perfectly cooked and seasoned, and the cooking itself felt effortless.
Posted by Jonathan at 8:28 PM No comments:

Let's give up our infantile fetish for process and celebrate the actual finished products.
Posted by Jonathan at 9:58 PM 1 comment:

There are very few things in my research that admit to a political slant. In other words, there is little that I can do to appeal to the left / right dichotomy, even though I skew heavily left in my own political views.

It just doesn't seem that that dichotomy is intellectually productive in any real sense. Where it does come into play, it is orthogonal. For example, if I were studying or teaching Miguel Hernández's prison poetry, my main point is not to prove that his imprisonment itself was unjust: that is a given, something all but the most rabid Fascist would deny. If I disagreed with another scholar, it would not have to do with that issue.

In a sense, a certain left-wing position is simply implicit, unquestioned and unquestionable, in my field. More politically conservative people or ostensibly apolitical folks often study medieval, or science and literature things.
Posted by Jonathan at 9:23 AM 2 comments:

And this is where the arguments about the freedom of speech become most tone deaf. The freedom to offend the powerful is not equivalent to the freedom to bully the relatively disempowered.

Here is the problem with this: freedom of speech has to be content neutral or it is nothing at all. Speech that you disagree with, or that targets "the relatively disempowered," is equally protected. If you believe otherwise, then you don't really believe in free speech at all. It might seem that that's a good move in the short term, but once you undermine the core principle then you can turn around and censor the disempowered voices very easily.

Of course, the language here is loaded: we can only "offend" the powerful," but we "bully" the disenfranchised.
Posted by Jonathan at 11:57 AM 2 comments:

1. Active racists. These are people for whom racism forms an active and unapologetic part of their identity. They are members of racist organizations or actively spew hate.

2. Covert, active racists. These people share everything with (1), but must deny publicly that they are racists, because they are elected politicians, etc...

3. Passive racists. These people are racist to a certain extent, but that isn't central to who they are. They might act racistly in certain situations, but aren't motivated by hate in their daily lives.

4. The indifferent. These would deny being racist, and look on disgust on those who are actively racist, but don't think a lot about race. They think MLK is great.

5. Passive non-racists. These white people are not actively or passively racist, and in fact strongly react to overt racism, but they simply don't care too much beyond that. They might be defensive if you talk about their white privilege, because they've had it hard too.

6. Active non-racists. These people recognize themselves to be a little bit racist, and try to actively combat that in themselves.

7. Deluded anti-racists. These people think they have transcended racism in themselves. They admit to white privilege, of course, but think of themselves as so committed to the cause that they have entirely transcended their racism.


The so-called "conversation about race" is designed to make people in categories 4 and 5 become part of 6 and 7. It ends up pushing those people back into 3 instead, in many cases. Groups 2-5 already know that racism is socially unacceptable, after all. If you call them racist, it could be a self-fulfilling prophecy.

Posted by Jonathan at 8:17 PM No comments:

I've seen the argument that grammar should not be taught because it doesn't improve one's writing to study grammar. I say this is idiotic, because it assumes that the purpose of grammar is to improve writing. Grammar is interesting in its own right, whether or not it has any practical use in prose writing or not. There is a joy in paying attention to the syntax of things, despite Cummings. A good writer should be interested in language irrespective of the usefulness of this knowledge. At the very least, a knowledge of grammar will prevent one from making false & idiotic statements about grammar.

Also, I am impatient with people who profess interest in language, but disdain linguistics, either not knowing that it exists or dismissing it, thinking their folk beliefs about language superior to actual scientific, intellectually rigorous study of it.
Posted by Jonathan at 12:58 PM No comments:

The 6th Best Place to Work

There's a web-site I log in to almost daily, for a company that advertises itself as the 6th best place to work in America. I always think that this is not an attractive way to advertise themselves. They could say they are in the top 10, but saying they are number 6 is strangely off-putting.
Posted by Jonathan at 10:38 PM No comments:

I was confronted by a man about 40 years old, a little taller than me, balding, with a slightly reddish complexion, and good-natured. He took me to task for sticking up for someone that the group had decided to attack. I asked red-head if he was going to beat me up. I was not afraid, even though it was obvious that this man was larger, stronger, and younger than I was. He said no, of course not. The conversation continued and my interlocutor made some homophobic slurs. In spite of this, I did not feel especially hostile to him. I began to swear at him, with some f-bombs, which surprised him, put him off guard and on the defensive. I was someone in control of the situation by virtue of my mastery of profanity. That's all I remember.
Posted by Jonathan at 10:32 PM No comments:

Seeing myself as Lorca guru, or academic writing guru, or poetry guru, always seems deeply pretentious to me.

When I am having difficulty singing a song it always seems to me that some other song, one I am not singing, would be easier to sing, unproblematic. But the song I happen to be singing is never unproblematic: it is only some other song that seems that way to me, because I am not trying to sing it.
Posted by Jonathan at 10:32 PM No comments:

I try not to read things I have written and published in the past. If I find that I like something I wrote quite a lot, then I wonder if I still "have it," can still be as smart as I used to be. If I am disappointed to find that I could have done better, then that is bad too. Either way, I can't win.

But I had to read a few pages of my Lorca book in order to cite myself, and I found that it reinvigorated me. I made the discovery that I really do "have it." It is easy to see myself as an everyday blunderer, stumbling through life as I tend to do, but when I re-read my own prose I realize that I can pretty much kick ass (immodestly speaking) in that narrow area in which I specialize. To minimize that is to sell myself short.
Posted by Jonathan at 12:06 PM 2 comments:

I think I could do my short form course as a short unit within a longer course on modern poetry. I had thought of doing a course based on Poundian ideas (melos / phanos / logos) but the short form would fit in there somehow as well.

Not that it is exclusive to phanopoeia or logopoeia. It certainly cuts across those categories. I wouldn't dare to do an aphorism course as a stand alone unit, since I wouldn't get the numbers of students needed to make the course make.
Posted by Jonathan at 3:27 PM No comments: