There are several interlocking frameworks I could use to conceptualize what I am doing in this book. In no particular order.

1) Melopoetics. Let's define this as the study of poetry in its own musical forms, and also in its historic connections to music.

2) Word and Music Studies. The idea here is to look at vocal music as a hybrid form (words + music) and look at what the composer does to an already existing poem.

4) Adaptation studies. The idea is to look at the transformations of literature in other media: films, operas, art songs, etc...

5) Interartistic studies. Here the central notion is to compare different art forms, usually literature and visual art, but more generally all of the arts.

6) The performance of poetry. Music is a way of performing poetry, by other means. A natural or unnatural extension of other performance practices.

Each of these frameworks has a particular bias, or way of operating.
Posted by Jonathan at 8:41 PM 1 comment:

On the one hand I cannot make too many value judgments, because my own perspective cannot be too intrusive in the book. If I just reject whole genres and styles, or let my antipathy to particular recording artists prevail, then I am not doing justice to my subject matter.

On the other hand, one thing I am looking at is kitsch, the superficial, depthless, opportunistic response to Lorca. One particular example is quite nauseating. Other artists are interesting limit-cases, who could be seen as kitschy, or not, depending on the listener.
Posted by Jonathan at 11:44 AM No comments:

I don't like the idea of "adaptation studies" as the rubric for my work. It seems too linear: here is a work of literature, and we can see it adapted into various other media, like film... I guess that's inevitable in the way I've set things up, but I'm not overly enthused about it.

Traditions of "interartistic" comparisons or "sister arts" provide another path. Googling this, it is obvious that the majority of work has to do with literature and the visual arts. Comparisons with music and literature are a separate thing, and not very connected with the usual discussions of ekphrasis.

Ekphrasis is mostly about modes of representation or mimesis. The painting is a literary object, telling a story that can be reproduced in a poem, for example. Or a literary painting can be the representation of a pre-existing literary narrative. The comparisons come easily, right?  because you have the same subject represented two different ways.

Writing on song we have the same ready-made comparison: we have the text itself, and the text as lyrics to a song.

What is missing is the idea that the human imagination itself is interartistic. We don't have to posit the various media as very different from one another, and then bring them back again for comparison. There have to be more interesting ways of doing this.
Posted by Jonathan at 11:38 AM No comments:

I'm reading a frustrating book on a trendy topic. It has some good and suggestive ideas, but is so defensive about being anti-academic and striking a certain cool pose that it seldom gets around to its actual points, much less developing them fully. The ideas are buried under mountains of verbiage. It'll say things like "I'm citing this by memory" or put in sarcastic asides and hashtags in brackets [in every paragraph]. The structure is digressive and provokes the response tl;dr.

What have you learned?

This post by Clarissa has been very inspiring to me. I have been obsessing all of 2018 about not being a musicologist and thus being dubiously qualified to write this book I want to write on music.  Clarissa writes:

The article was accepted for publication with cosmetic changes 15 minutes ago. Both reviewers praised my deep knowledge of film theory.

I don't doubt this at all. Intellectual humility is all well and good, but it is possible to learn some basic things to a level of competence and participate in intellectual discourse at a high level after a short time. Thanks to this post I have stopped worrying about my lack of musicological chops.
Posted by Jonathan at 1:06 PM 1 comment: 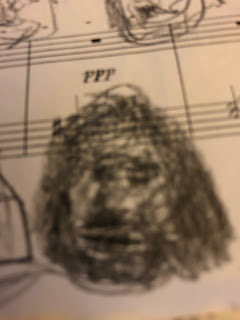 If you are learning a piece on the piano, you are also learning how to learn, increasing your efficiency. Anything you learn will also be applicable to any other piece that is similar in any way, with similar patterns or techniques.

As an adult, learning is better, in some ways. All the self-discipline and motivation that you have learned from learning to do anything else is applicable here. There is no parent making you take piano lessons any more. It is all on you. Yet there need be no ego involved, either. You don't need to compare yourself to your siblings or some other kid who is more talented. You simply know that vast numbers of people are more talented, and an even more vast number doesn't play the piano at all. It simply doesn't matter.

Of course, people who want to get really good have to start as young children, but I am talking about people who play as pure amateurs. Even with us, it is good to have learned something as children, but the learning process is actually more enjoyable when you are older. The teacher knows you will have practiced and are bringing to bear your full analytic ability to each new task.
Posted by Jonathan at 5:46 PM No comments:

There are a few really obvious things I've learned about piano playing. They weren't all obvious when I began.

The level you need to get a piece to to play for anyone else is much greater than the ability you have when you think you can play it for yourself at home. First, there is the added nervousness; secondly, you aren't really playing it at home as well as think in the first place.

To play a piece well, it has to be far easier than your intermediate level. It has to be something that you can play without any hesitation for the notes.  All the attention most be on nuances: dynamics and exact phrasings. This applies to difficult pieces as well. They must seem as easy as a simple child's piece in order to sound good.

Muscle memory and proprioception rules. It is not sufficient, because you can blank out mentally and the muscles won't do what they are supposed to do. You can also engrave mistakes into your muscle memory. Mistakes are not accidents, but things you have learned wrong. You should know where your hands and figures are, always. Looking at the keyboard is not as efficient.

Looking at the written music, by the same token, is distracting from actually playing. You have to get to the level where you either know the piece by memory, and the score is only a reminder, or else be so good at reading the score that there is no difficulty there. Imagine trying to recite a poem you didn't know in an alphabet you could barely read. You would either have to know the poem well, and use the alphabet only as a crutch, or get better at reading that alphabet.

Linear, right hand patterns are not difficult, inherently. They can be learned slowly, and gradually sped up.  The same goes for linear patterns in the left hand, involving only one note at a time. Most of my difficulty seems to come from playing more than one note at a time.

Even numbered intervals will be written on a line and a space, so a fourth, a sixth, and octave, etc... Odd numbered intervals are written all on lines or spaces, so thirds, ninths, etc... This pattern extends as far as you can count. Intervals, then, look a certain way on the page, and are more distinctive looking than individual note values.

Every note will change from a line to a space or space to line at every octave.
Posted by Jonathan at 12:53 PM No comments: