Here's an idea I came up with while explaining to one of my authors what was wrong with an early draft of a paper. I call it the Ramp for the Reader. A paper is trying to raise the knowledge level of the reader. We're trying to get our reader to understand something better than they did before they read what we wrote.

The problem with my author's paper was, in part, that it assumed too little about what the reader already knew, and, worse, that it gave the reader nowhere to put the new information after reading. I drew this picture: 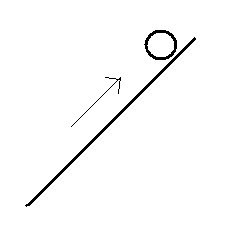 Reading the paper looked like it would be a constant accumulation of information intended to get someone who knows nothing about the subject to know everything about it. It would be like rolling a ball up a hill. But what was even worse was that once once up there you would have keep standing there to keep it from rolling back down to the bottom ... and into the abyss.

As an alternative, I proposed the following image: 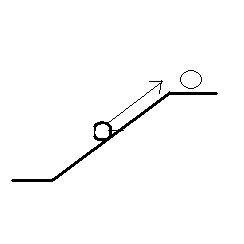 Here we have a platform or rest station, both at the top and at the bottom. (We could add a few along the way as well, of course.) If the reader gets tired, the ball rolls down to a level of already accomplished knowledge. If the reader succeeds, there is a nice place for it to rest at the top.

The trick is to identify the ball and the ramps. The ball is your main point, the ramp is your writing. The ramps are existing bodies of knowledge, already available in the literature. The reader has to get that ball up the ramp. So make sure the ball isn't too heavy, and the ramp isn't too steep.

It is the reader's job to get to that first ramp, where the ball is waiting. That was another problem with the draft we were talking about. It started as though the reader was already pushing the ball up the ramp. But a paper always has to start by identifying the ball and the first platform. It has to tell the reader what the writer assumes about where the reader is, right now, as the reading begins.

Nice post. I remember this from "Research as a Second Language." There should also be a point where the ball rolls downwards of its own accord, where the reading is almost effortless.

I like that idea. A text should take a claim and present it on the shared background of common knowledge (common to a group of specialists). It should then offer a ramp for the reader to roll that claim up to another platform of greater knowledge. Then another and perhaps another. But at some point there should be a "denouement". Having rolled the claim up to the pinnacle indicated by the writer (where the writer "is at" intellectually), the reader is now given a ramp to roll it down again, from a higher platform of knowledge to a slightly lower one. The reader here experiences mastery of the proposition the paper puts forth. It is not so steep that he has to let go. He is in control.