The Lipstick Paradox: A Theory of Everything

Lipstick seems to discourage exactly what it has invited. It focuses sexual attention on the lips, yet makes one hesitant to kiss those very same lips. The lipstick will smear, get ruined, or end up on other surfaces: cheeks, collars, other people's lips. Some would not enjoy the texture or taste of lipstick, when kissing a woman. Some would say it is worn to attract men, yet the majority of men are not big fans of it. (I happen to like it, but that is the subject for another post, maybe.)

Young women use it to look older, to be adult-looking. Older women, in term, use it to look like a younger version of themselves. Semiotically, it seems relatively amorphous, with a core set of meanings and others that are perhaps incidental. It is worn in a variety of ways. It can be theatrical or relatively subtle, a mark of mere "professionalism." It can just give the slightest hint of natural looking color, or be deliberately artificial. Or neutral, as in a woman wearing lipstick that is, in fact, the same color as her lips. It can mimic the color of the actual lips beneath it, or be wildly different. It can enhance color, or even mute it, in the case of white lipstick. It can seem to be one with the lips, or sit awkwardly on them. It can have a variety of textures: ragged, smooth, wet or dry. 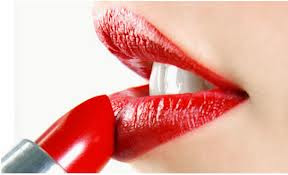 Baudelaire has an classic essay on cosmetics "Eloge du Maquillage" where he praises them, precisely, for their artificiality. The aim is not to imitate or supplement nature, but to replace it with a flagrantly artificial artifice. (If we recall, an earlier discourse on cosmetics had often condemned them precisely for their concealment of the truth.) Baudelaire can talk about "la haute spiritualité de la toilette."

Thus it is perhaps the perfect "object" of theorizing. As cultural history, psychoanalysis, deconstruction.

As a fetish, in Freudian terms, it works perfectly. The tube itself is phallic shaped. (You can't imagine a similar fetish around a flatter packaging.) A fetish is associated with the body but always displaced, at one remove. For a lipstick fetishist, the desire is displaced from the lips themselves (themselves stand-ins for labia?), onto the color of the lips, which can be seen separately from them. As though desire itself could be bottled. All of this is super-obvious. It is probably too obvious to explain how it might be a Marxist consumer fetish, or an example of the overt sexualization of consumer desire.

Rhetorically, the lipstick is metonymy. That, in other words, is how the fetish works, by "contiguity" (Jakobson).

Lipstick could also be the perfect example of Derrida's supplement.

Finally, it is a textbook example of the marking of gender performance. Women's and men's lips do not differ all that much physiologically. Women dressing up "as women" are performing their own gender identity. It is easy to see, for example, that a woman in too much lipstick begins to look like a man in "drag." (Butler).

So why lipstick? There is no reason at all. Anything at all can be a "theoretical object." I just happened to have chosen this particular one.
Posted by Jonathan at 10:12 PM