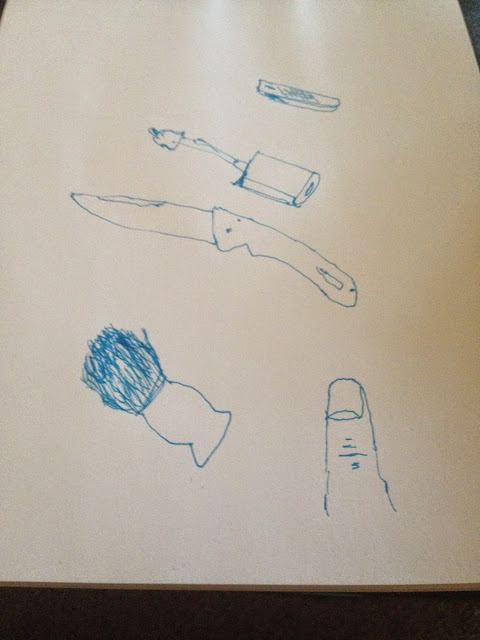 Things like this are not hard to depict. You can see a shaving brush, a nail clipper, a folding knife, a computer accessory. (I drew a thumb too as a point of comparison.) Once again, the drawings are quite crude, and it is easy to see what's wrong. With a minimum of effort I could probably do drawings of these objects that are about twice as good.

All children (apart from those with specific disabilities or conditions than prevent them from doing one or more of these things) sing, draw, and use spoken language. Drawing and singing become more specialized activities for adults, who will tell you they can't carry a tune or draw a picture. (What they usually mean by not being able to draw is that they draw about like I do.) Adults continue to use language too. The written language is accessed through academic training, beginning with learning to read and write. Being a good writer is like being able to draw or sing adequately, not in a childlike way. We expect a competence in written language consonant with one's level of academic achievement.

People who are not good writers often think they are. I don't think people who draw as well as I do think they are competent, but people are deluded about their ability to write well. I think it is because they cannot see writing as writing. They think of mechanics (punctuation); avoiding zombie rules (no split infinitives); ideals of concision & clarity (often badly understood), but they don't think beyond those elements.

I am somewhat ashamed of how badly I draw, because I think that everyone should have "college level drawing." What I mean by this is not being a great artist, or even having the level of competence of an average art student, but simply being able to pass an exam in which you had to draw a good three-dimensional depiction of a shaving brush.
Posted by Jonathan at 4:25 PM

I like the idea of college level drawing. I know a woman whose instinctive response to people who claim they don't know how to draw pictures is, "How do you see?" I think getting students to draw in class might be a good idea as long they understand the point, namely, giving them a clear view of something they can do better. It's like you say, it's obvious how they could be better. If they can then turn those same eyes on their writing, something good might happen.

When you wrote that people who weren't good writers often believed that they were, I immediately thought "Ugh. Maybe that's me?"

So what *is* good writing? What are the differences between good technical writing, good fiction writing, good essay/non-fiction writing, good journalistic writing? And is it possible to write well well across these boundaries? (It's certainly not universal, as many scientists who write technically all the time would likely make sorry story tellers.)
I am not really asking you for definitions here, I mean the questions more rhetorically, as food for thought.